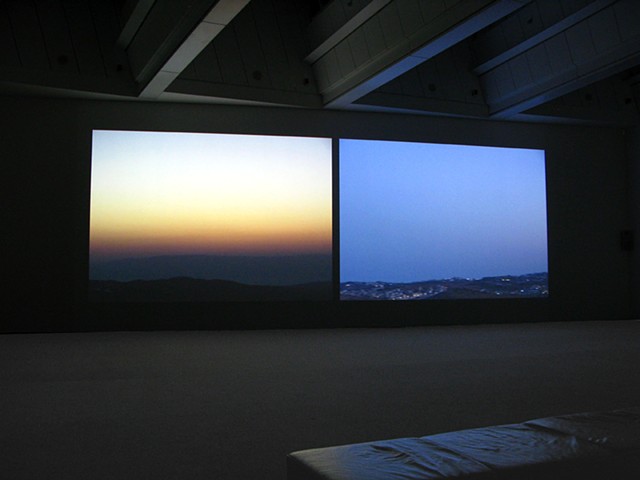 Techniques for the observed.

“Put all the images in language in a place of safety and make use of them, for they are in the desert, and it is in the desert we must go and look for them”

-Theodor Adorno, “Transparencies of film” , in: The Culture Industry. We are familiar with Western representations of the Middle East that seem to invest all their energies in the image. But these images are commonplace, remaining both static and misleading. If it is true that images are one of the pivotal regulators of contemporary society, should artists not break away from stereotypically heterogeneous modes of representation? How much can one omit while still maintaining a circumscribed totality?

Mauricio Guillen’s latest film DUCHIFAT – comprises two continuous 360&#730; camera pans of the skyline from the point of view of the roof top of King Hussein of Jordan’s abandoned summer palace in East Jerusalem – one moving from East to West and the other from West to East.

Extending the tradition of stereoscopic photographs from the 1840’s – which depicted two views of the same thing from different vantage points- the structure of the film presents the viewer with two parallel situations which together create an asymmetric horizon.

Relying on perceptual mechanisms to negotiate and reconcile differences (ie.stereoscopy) and on a number of specific yet obscure references, the viewer is left to his own devices in constructing a mental topography of a place. For the duration of the film, we occupy the position of the subject in an unstable landscape constantly oscillation between what we see and what we know. This oscillation is aptly described in the following anecdote:

The exhibition The Lure Of The East , presented at Tate Britain in the summer of 2008, offered (as quoted from the catalogue) : “Vital historical and cultural perspectives on the challenging questions of the ‘Orient’ and its representation in British art. Bringing together over 120 paintings, prints and drawings of bazaars, public baths, domestic interiors and religious sites, and all the major genres, themes and preoccupations of Orientalism in British art will be considered”. The most striking painting in the exhibition however, was one that highlighted the inherent problems of the whole thematic. It was Arthur Melville’s The Cock Fight, a painting of an erased event: On his return to Europe, Melville decided to erase the actual fight of the birds from the centre of the painting leaving behind a void and the eager surrounding crowd staring into emptiness.

Not just an image, but a just image.

Duchifat, A travesty of a word, - it enjoys multiple references to the Middle East. It is the Hebrew word for Hoopoe (since May 2008 Israel’s national bird), The Hoopoe appears in Rabbinic and Qur’anic literature alike (Hudhud , its Arabic name) as the messanger between King Salomon and the Queen of Sheba (Balqis), an allegory for movement, fluidity, communication and shared folkloric tradition. Duchifat is also the name of an Israeli batallion from the Kfir brigade operating in the Palestinian town of Ramallah.